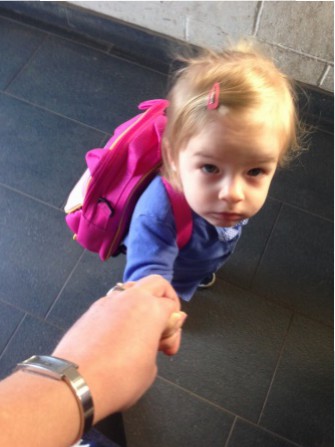 “Today I will mostly be irrational.”

When I was pregnant, I had lots of knowing advice and advanced warning about becoming a parent. The worry (lots), the stress (lots), the love (lots), the sleep (not lots).

What they didn’t tell me was how some of the more mundane (and previously piece-of-cake) makings of our daily lives will suddenly become my biggest challenges. And perhaps it is this little lot that should actually have come with a warning. Or, at the very least, a double G&T.

Eating
Now, I have a daughter who isn’t food’s biggest fan. A lovely homemade spag bol? Delicious on a Tuesday, but other days of the week it might as well be poison. Chocolate – everyone loves chocolate, right? Wrong. Not bear. I’m not complaining about this – healthy eating is a good thing – but there are very few toddlers who turn down an Easter egg in favour of a handful of mud from the garden, and one of those is my daughter.

No, food is of little interest. Unless it’s my food – in which case she is ALL over it. Literally.

Made the (stupidly optimistic) decision to go for lunch, just the two of us. Ladies that lunch, me and my little buddy – nice image, eh? I ordered a cheese sandwich for her, a salad for me. Does she want the sandwich? Of course not; she had a pack of Quavers 48 hours ago – why would she possibly want a sandwich now? Does she want my salad? Well, she wants the cucumber and she wants to bury her hand in the salad and waggle it around, shouting a whole load of random noises. Loudly. Lettuce can’t half travel and loud noise attracts attention. Go figure.

So that day I wolfed down what remained of a manhandled salad like I was on borrowed time, and we left, deciding it’s best we eat at home in the future where I can at least smuggle my salad into the utility room to spare the walls from incoming lettuce leaves.

Watching TV
To those who think that being at home during the day means we’re glued to Jeremy Kyle, you couldn’t be more wrong (and not because it’s total rubbish that I have no intention of watching even if I could).

These days the TV is not mine. If it’s on, she can sense a news channel a mile off (it’s nowhere near animated enough), and she knows if Doc McStuffins isn’t about to make an appearance. The Sky planner is full of Peppa Pig and the TV itself is these days found coated in finger prints or biscuit. Or both (mainly both, tbh). 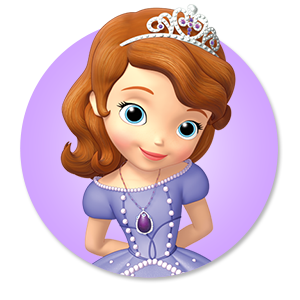 Like butter wouldn’t melt: the bane of my life

I can often be found absentmindedly singing to myself. Not the latest number 1, not a classic, or indeed anything remotely cool. No, the current tune of choice is the theme tune to Sofia The bloody First (who, incidentally, Bear knows as ‘Beer’ – said in a very Welsh accent; beee-ar.)  I can also often be found tuned in, like a cretin, to Jake and his piratey friends long after Bear has gone to bed. Not cool.

Shopping
When Bear was tiny, slept (or not, as it happened, but could at least pass the time happily in a pram), and generally had fewer opinions than she does now, I used to go into town for a wander every now and again. I’d time it right so that we’d run all our errands in the morning, go somewhere to give her a bottle and then wait until she was asleep before I dared to eat lunch in peace.

I didn’t know how lucky I was. Shopping now? Quite possibly one of the most un-fun days out ever known to man. First off, she wants to walk. So while trying to navigate the buggy through aisles, around corners and – hopefully – people, WITH ONE HAND, I am also trying to stop Bear from scaling shop window displays, pulling clothes off of hangers, taking her shoes off in the shoe department (bit of a needle in a haystack situation there), or going up to mannequins and tickling their feet. Yes, this did happen.

In a moment of blissful optimism stupidity, the 3 of us went to Swindon shopping outlet the other weekend. We figured there was something for all; shops for us, and those little cars you can hire and push her around in to keep Bear happy. What’s not to enjoy? Well, apparently, there’s a lot not to enjoy. 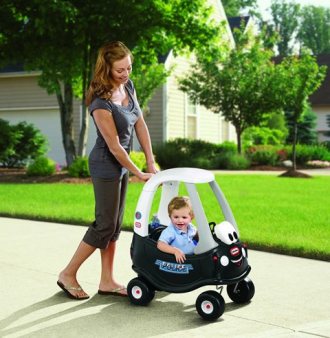 This picture is not representative of how you or the child will feel when you hire one in a shopping centre. Fact.

Those cars have all good intentions but to even the most rational of 19 month olds (and I’m pretty convinced ours isn’t one of those) they are a toy. Pure and simple. They are not a mode of transport, they are not a way of pacifying your child while you get some birthday shopping in for Daddy, they are not ‘fun’ – despite your most reasonable assumptions. So Project Swindon ended up as lunch, followed by a mahoosive tantrum, and finished with a shopping dash (me), a sit on a bench (Paul) and an hour of getting in, out, in, out, in, out, in, out, in, out and in. And out (Bear).

Weekly Big Shop
Supermarkets aren’t much better. If she’s not pulling everything at her level off the shelves, she’s pointing at greetings cards, toys and all other Sofia The First paraphernalia yelling “Beee-ar, beee-ar”. This continues around the store, because once she’s cottoned on to a new word/noise she gets a tad obsessed.

And I am only too aware that toddler cries of “beee-ar” when you’re down the wine aisle don’t exactly scream ‘responsible parenting’.

Yes, Velcro. Once upon a time it was Bear who had the issue with it, now it’s me. So few girls’ shoes come with a buckle – it’s all about Velcro, which seems fine in theory. Except Bear has quickly gotten into the (really annoying) habit of undoing her shoes at every given opportunity.

How much hassle can one pair of shoes be? A lot, apparently.

Our car is not the tardis, but for a split second there I wondered if either aliens or Derren Brown had magicked it away (rational thinker I am not). I couldn’t find it anywhere, and we’d only been in the car 5 minutes. I’m hunting around her, behind her, under her, in the change bag (which was zipped up and out of reach, but you never know). In the end I have all 4 doors open, I’m clambering around like a crazed woman looking for this bloody shoe, she’s yelling “mummy, mummy” repeatedly which is lovely, but there’s a time and a place, you know?

I was just about to give up, go home and get some other shoes and write to Derren Brown and/or aliens to return the rogue, Velcro-fastened, spotty shoe, when I find the blighter so far under the driver’s seat that it might as well have its own seatbelt. Bear sits behind the front passenger seat, so that must have been one hell of a throw.

*In my defence, our days are generally a lot less errand-y than this normally, but if she gets pleasure from the whole ‘taking her shoes off’ thing then as long as she’s happy, I’m happy.

GO SHOPPING WHILE YOU CAN!
So to all new mums, watch a boxset of your choice, relish the fact that your little one only wears socks, and GO TO THE SHOPS. It doesn’t matter if you’re make-upless and are wearing your slippers, just enjoy the time when they can’t move and they don’t have their own ridiculous and unrealistic opinions on everything you do.

Because as fun as it is (and it is fun, honestly**) the toddler stage of the game doesn’t seem to come with as many Parental Advisory warnings, and when they’re wearing one shoe, lobbing green vegetables, and yelling “beee-ar” down the wine aisle of Tesco you kinda wish it had…

One thought on “Toddlers & tantrums: the truth”

Mum In The Madhouse
www.actuallymummy.co.uk/
Who's the Mummy?