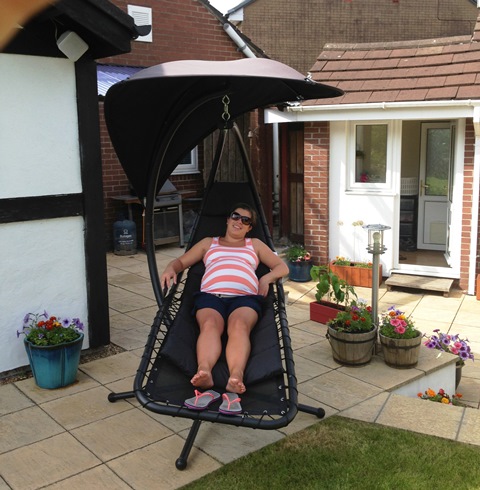 Anyone that knows me well knows that I have an annoyingly good memory. I remember the useless stuff – what I wore to something or other, what the weather was like on such-and-such a day, and (most important of all, I’m sure you’ll agree) what I – and others – ate on these occasions.

As I said, it’s annoying.

This time last year I was in my 37th week of pregnancy and we had an appointment with the midwife in the afternoon. I’d had a jacket potato with cheese for lunch that day (but that’s not relevant here). Part way through the bump-check ritual, she said “I think this baby’s breech.” Which was nice.

I was so lucky to have a straightforward pregnancy. I had a bit of sickness at the beginning but nothing major, and my cravings were for healthy stuff like melon, pineapples and oranges (and ice cream. LOADS of ice cream. Good source of calcium, when eaten by the tub. Ahem). The only thing that turned my stomach was chocolate – not ideal when your husband works for Cadbury and the house is full of the stuff, but nothing to complain about. All tests were fine, all scans were fine, all midwife appointments were fine. You get the picture.

So when she said that Bear was the wrong way up I did panic a little, especially as by that stage of the game she ‘should’ have been upside down. A year ago tomorrow, we saw a very nice consultant down at the Royal Glamorgan who confirmed that Bear was, indeed, in need of a little somersault (or, to use its technical name, an external cephalic version). And a year ago this coming Friday we went down to the hospital with our bags packed, facing the possibility that she could arrive early as a result of the procedure.

I had made the fatal mistake of Google-ing ECVs and cried a bit lot at the horror stories (why do people feel the need to share these?!). But the procedure itself was quick, a bit uncomfortable and really really clever. Paul stood with the midwife and consultant and watched as the registrar taught Bear how to do her first forward roll and, by all accounts, it was a pretty amazing watch. I was too busy concentrating on gas and air to see anything.

While it didn’t bring on labour (little did I know there’d be another 5 weeks of waddling in store for me), I was told not to travel too far for 48 hours. Which put a spanner in the works of this weekend, one year ago. Yep, I had to miss my own surprise baby shower!

This Saturday (not a year ago, but this actual weekend) I get to spend the day with 6 of my lovely friends and their husbands – the same bunch that threw me the baby shower I couldn’t turn up to. Some of them I have known since University, and nearly 16 years later we have 10 children between us with 1 on the way. How grown up are we?*

Also a year ago, the world’s media was camping outside the Lindo Wing of St. Mary’s hospital awaiting the birth of Prince George. But that’s not nearly as exciting as my jacket potato lunch, so I won’t bang on about it.

3 thoughts on “My (annoying) memory lane”