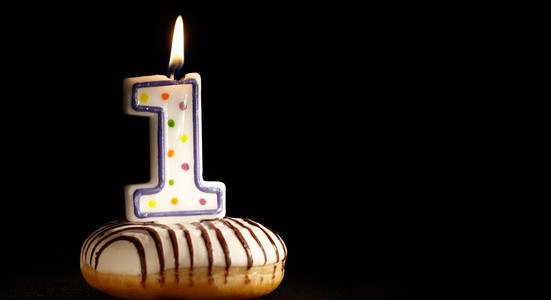 One whole year of internet ramblings. Who’d have thunk it?

This week marks the blog’s 1st birthday. A whole year since I started rambling on t’internet. We won’t be throwing a party or eating cake, because it’s only a blog and that would be ridiculous.

Although we may actually have cake, because any excuse is a good excuse for cake.

This week has been a big one for us. After enduring 2 years of mainly my company Monday to Friday, we’ve signed Bear up to start playgroup in September. Three mornings a week of playing, socialising, learning, making friends and, in short, growing up. I want to have a little cry just thinking about it.

This is one of the biggest decisions we’ve made for Bear so far I reckon, and although it’s a big one we are positive it’s the right one in preparation for starting school next September. I’m guessing there will be tears and upset when I drop her off in the early days, and that it’ll take a little while to adjust and settle. But I’m nearly 35 – I need to man up and stop crying at everything (apart from DIY SOS. I’ve tried and it’s no good, it gets me every time.)

This week also marks the first time in what seems like forever since I have sat down at the laptop, mug of tea as my sidekick and my procrastinating head on, and written. A few people have commented that I have been quiet on here for a long time, which I know is code for “write, woman.” Then as I realised Chatterbox Mummy was nearly 1, I also realised what I promised when I launched the site a year ago; to be honest.

So here goes. Me being honest. 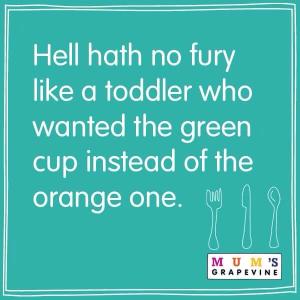 Before I go on I am going to caveat everything I write: I KNOW how lucky I am. Our daughter is perfect, our life is brilliant, my little family is more than a lot of people are lucky enough to have and for that I am and always will be grateful. But you know when you feel offended by something, even though someone doesn’t mean to offend you? In the same way, just because I know how lucky I am doesn’t mean I don’t have days where everything is just a bit too much.

Tantrums. Screaming, shouting, kicking, hitting. I know you’re either going through the same or have done at some point, and I know her middle-of-the-shop strops aren’t going to be the pinnacle of our days forever – it is just a phase. But, when you’re in the middle of a phase you can’t see it as anything but ‘the way it’s going to be until the end of time’, until you’re out the other side. 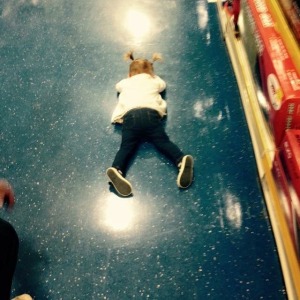 The challenge
There is advice everywhere, and rightly or wrongly I try to listen to it all. The constant gem that we’ve had since day one (and it’s right, I am sure of it) is that time goes so fast so enjoy every minute.

But when Bear is going berserk because we won’t let her play with a bottle of toilet duck (seriously), lobbing crayons across Pizza Express because she isn’t allowed to eat them, or rubbing Dairylea into the TV in protest of the adverts coming on between episodes of Peppa (commercial children’s channels are the Devil’s work, FYI), I don’t know that these will be the days that I look back on fondly and laugh (“Hahaha – do you remember the time we had to abandon the trolley and head home with a toddler, who had clearly lost her mind, going ape under one arm and the shopping bags under the other? You had gone bright red, I was about to cry. Ah – good times”! No. I’m unlikely to say that. EVER.)

Then along comes 7pm and she’s all cute and pyjama-y and she’s all cwtched in (that’s Welsh for cuddle, only better). We read books and she says “a-woo” (that’s Bear for “love you”), then she sleeps. All cute and sleepy and baby-like, and there are no incoming crayon missiles, no smudged Dairylea on the electronics, no feet stomping, no pulling her pigtails to make her point clearer (this happens). She is my gorgeous girl, all is forgiven, and I head back downstairs. Feeling guiltier than I have ever felt in my life.

Because I have wished for bedtime since 3pm, and now I miss her. 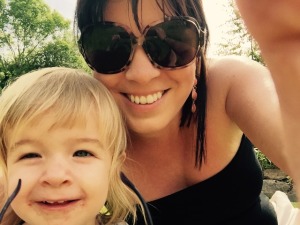 Who cares about Dairylea on the TV anyway?

It’s the right thing to pay her little attention when she’s tantruming – to not rise to it, give in or let her get her own way (especially if ‘her own way’ equates to letting her play with cleaning products). And if these strops are regular (and – up until a few weeks ago – they were countless, daily and predictable), you end up feeling like you’ve spent a good portion of the day not rising to it, not paying the tantrums any attention, hiding in the loo for 5 minutes just to remind yourself what normal volume feels like.

And it’s also the right thing to make the most of every minute because she will be 18 before I know it.

But when you’re in the middle of the (premature) Terrible Twos, with a headstrong little lady who is as stubborn as her mother, you can’t do both. 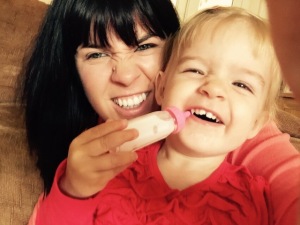 I am told regularly by my parents that the apple didn’t fall far from the tree with Bear. Everything she does, I did. Every flounce, strop, tantrum and public display of mentalness – they were there too, about 33 years ago, trying to fend me off and restore the peace. Worryingly, I can still perform all of those skills now (*smug face*).

As I have avoided writing for however-many weeks, as I have sat sadly in the evenings missing my girl (not that I’ve gone upstairs and woken her up – I’m not stupid), I am acutely aware of one thing; she’s growing up. She’s off to playgroup, she’s saying things, doing things, being things that she wasn’t a year ago and that’s amazing to watch. Not least because we’ve played a part in creating that little personality (not the toilet duck part, mind. That’s just weird).