I went to Sainsbury’s today and it’s full of Christmas stuff. Now, I love Christmas as much as the next person (to be fair, I probably love it more), but it’s only just October and all this festive craziness sends me into my annual oh-my-God-what-if-I-don’t-sort-presents-and-cards-in-time panic.

Apart from a few ideas for a few people (and by this, I mean the people that have told me what they want and/or asked for vouchers), I’m clueless when it comes to buying decent gifts this year. Especially for the little people in my life – there’s going to be a new niece on the block between now and December, my nephews are getting more and more into the latest gadgets and games and I can’t keep up, and as for Bear, well, her current fave pastime is dancing to All About That Bass, so goodness knows where to start with her.

It got me thinking about toys when I was young, back when the Argos catalogue was the Holy Grail for all things Christmas:

My Little Pony (if my brother is reading this, I know exactly what stupid song lyric comes next): These were a classic in the 80s. Plastic toy horses with manes and a hairbrush, nowt wrong with that. You could buy a stable or a castle and all sorts for your collection (I always wanted the castle, if you’re interested). These days My Little Ponies are still kicking about (not literally, they’re not real you know) but they’re all fancy and animated. I’m not so keen, and not just because I’m 34 but because – in my very humble opinion – the originals were the best. 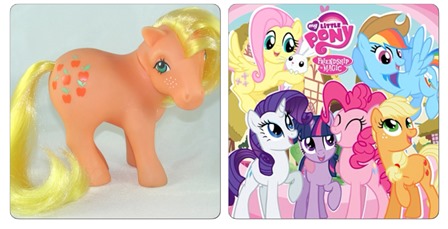 My Little Pony: the before and after shots

Screwball Scamble: You can’t beat a decent board game at Christmas – these days it’s Trivial Pursuit or the Logo Game, but when I was a child this would entertain me and my brother for hours. I think you can still buy it, but that hidden orange marble maze riled me when I was 9 so it’s best I stay clear.

Up there with it was Game of Life (that caused a few rows), Monopoly (which Dad always won, and in recent years has proudly admitted that this is because he cheated), Downfall, Connect 4, Guess Who and Bed Bugs. I was also the proud owner of The Neighbours Game, which was rubbish.

Rainbow Bright and the Sprites: I have a vague recollection of entering a colouring-in competition (not recently, don’t worry) to win a Rainbow Brite toy. Everyone had one or more of the Sprites, they were common as muck, but Rainbow Brite (and her trusty rainbow-maned unicorn) – now they were like gold dust.

I didn’t win the competition. I’m not bitter or anything, but I haven’t entered a colouring-in competition since. Make of that what you will.

There were also Care Bears, Sylvanian Familes, Glow Worms and Cabbage Patch Dolls. I bet you’re sitting there going “Oh yeeeeaaah!” as you recall your own collection(s). Good memories, eh?

This morning, after 20 minutes of absentmindedly watching Curious George on my own, some adverts came on for this year’s must-have toys for Christmas. I’d like to say there was a classic game or doll that Bear will be reminiscing about 20 years from now, but sadly I don’t think that’ll be the case.

First up was a doll with a nappy, and you changed it. A modern day Tiny Tears, I hear you ask?  Kind of, only this doll deposits stuff in her nappy, and it’s not very realistic. Yep, the doll sometimes leaves a little shiny star in there and you get to collect the stars and make a bracelet.  I don’t really know what to say about that.

Up next was Silly Moo, the ‘udderly funny’ game where you milk the cow (so say the advertisers, I didn’t make that up). You roll dice and pull the udders to see if Silly Moo drops a pat or a pint. Again, I don’t really know what to say about this – but I can’t see cow pats at the table being the most Christmassy of games for us this year. We have enough nappy battles and flying poo, thank you very much, so with a newborn, 1, 2, 3 and 6 year old to buy for, it’s back to the drawing board for me. Or, at the very least, the Argos Catalogue.

If, like me, you grew up in the 80s but haven’t (unlike me) spent the last hour on Google looking for toys and games from your childhood, then watch this – it’ll make you smile and it’ll make you feel old. Enjoy!