And so, it came to pass, that once again it’s 31 December and no-one has a clue what day it is, let alone where the last 365 days have gone.

Ten years ago, I saw in the new decade with friends I’d made in the previous one. I wore a dress that turned out to actually be a top, and I drank port because I thought it was wine. Fast forward to today and so much has changed; when I drink port it’s deliberate, I have a whole tribe of friends that have also become a huge part of my life since having my little people, and I always wear trousers with my tops. Well, almost always.

2019 was, at times, a hit with a capital S. But people don’t read this blog for all of that shizzle, and I’m not airing my dirty laundry here. Let’s just say that I have spent the year coming to realise that 3 can indeed be the magic number when you have no other choice.

Foreign adventures
The Boy had his first foreign holiday as we jetted off to Greece for a week. Nana and Grandad (or Mum and Dad, as I like to call them) had the pleasure of a 4 hour flight vs The Boy, who took issue with sitting still for longer than a minute at a time, demanded we all repeatedly went to the toilet because “it’s fun in there”, whinged a lot, then fell asleep (I shit you not) about 30 seconds before the wheels hit the tarmac.

Bear found her fins in Greece and came back with a t-shirt tan that would be the envy of anyone who is into that kind of tanning, because she spent most of daylight in the pool. We befriended an inflatable unicorn, ate our bodyweights in feta cheese and ice cream, and managed to avoid any plate smashing (despite toddler tantrums). Although “NO! I DON’T WANT TO!” was the most commonly-used phrase of the week (The Boy was still catching up with his lack of aeroplane sleep…), it was one of those holidays we’ll always remember. And it made me want more far flung adventures with them both (ideally when he’s over his toilet obsession).

The writing gene
As well as being a little fish (or mermaid, apparently), Bear has become my little bookworm – this makes me happy! Not only can she read, she wants to read. And write! I find post-it notes all over the place, cute little messages that she’s written and hid. And others that, well, erm…yeah.

Her school topic since September has been the Great Fire of London, and it’s the first time I’ve seen something capture her imagination for so long. There’s nothing she doesn’t know about it (although my knowledge is rusty at best, so she could convincingly tell me what she likes and I’d believe her), and will tell anyone who listens all about it. Although, one thing has me wondering whether she listened intently at ALL times, because when I asked if she’d learnt anything about the plague as part of the topic, she said “Oh yeah, I know about the plague. It’s a sort of time machine.” Which I believe is incorrect…

Every day’s a school day
I’ve learnt a fair bit this year too – and I don’t mean that time machines were not commonplace on the streets of London in 1666.

First off, I’ve learnt that if there’s one book you ever read it should be Lost Connections by Johann Hari. Because it’s brilliant, t’is all. And that if you go to the theatre just the once, treat yourself to Hamilton tickets. It’ll change every opinion – good or bad – that you’ve ever had about musicals.

I’ve also learnt something I’ve probably known for ages: THE INTERNET LIES. To go all arty farty for a moment and to quote some song lyrics – “All I see are picture perfect lives. There’s nothing real about them but, sometimes, what I choose to see is never good for me.” So why do we continue to do it? I’m very much pointing the finger at myself here when I say ‘we’. If we stopped aspiring for the unattainable, heavily-filtered 11th attempt at a photo-perfect family/moment/day/life, then maybe we’d realise that what we have right here, right now, is real. And there’s a lot to be grateful for when ‘real’ is more than enough.

A few of our favourite things
Our regular faves in 2019 have been evening walks with scooters, bikes and toy buggies, Discotots, Rainbows, swimming, gymnastics and pre-bathtime raves to anything Justin Fletcher is offering on Alexa. All things Barbie and anything car-related have been pretty much constants, as has watching The Greatest Showman over and over and over…

Bear has channelled her inner teen (God help me…) and has become quite the fan of make-up, painted nails and wearing tiaras to dinner. A few weeks back she said it’s because “I reckon I look quite sassy”. That’s me told then.

As for The Boy, his very favourite things in life are not me and his sister, but rather anything (literally anything) that Bear happens to be playing with, and washing machines. My washing machine, his (toy) washing machine, washing machine comparison tests on YouTube (yep, they’re a thing), and the new theme park in South Wales that is more commonly known as Currys. 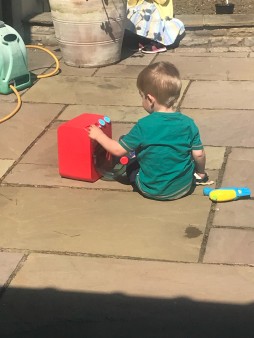 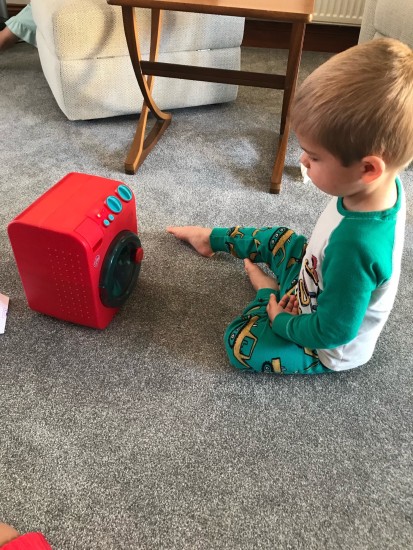 New decade, new beginnings
I remember a primary school project where I had to write about what the world might look like in 2020. Naturally, there were hoverboards and bed-making robots and computers that went to school for you and chocolate was healthy blah blah blah. Turns out, not so much.

Instead, everything seems very grown-up and serious and political. There are no helpful robots, school is still a sensible place to go in person, and I’m pretty sure I shouldn’t have eaten quite as much chocolate as I have these last few weeks.

In 2020 I turn 40 (I know, I know – I don’t look a day over 52). Naturally, I’m going to eek out the celebrations for as long as possible so if anyone fancies celebrating with me, then hit me up. Not a literal ‘hit’, obvs – I’m nearly a middle-aged woman don’t you know.

I’m sure 2020 will throw its fair share of challenges my way, so first thing tomorrow I’ll be putting on my Big Girl Pants™ and I’ll be starting over. Is life panning out the way I thought it would? Not really. Is this how I thought I’d be seeing in the next decade when I was necking port 10 years ago? Probably not. But you know what? My 2 favourite little people are currently arguing about whether Barbie should/shouldn’t* go in the washing machine…I reckon it’ll all be ok.

Happy New Year peeps. May it be happier, healthier and full of the very best people on the planet.

One thought on “Planes, trains and washing machines: our 2019”