Waters went, 13 hours or so of contractions, 2 doses of Pethidine and the all-important paracetamol (just to make you feel like you’re helping the pain, when really it’s not even touching the sides). After all that time, all that pain, you can imagine my delight at being told I had reached the dizzy heights of…ahem…4cm.

Then things became a bit lot of a blur. After an epidural, people started getting a bit panicky. Lots of rushing around, lots of flashing lights and monitors going nuts. A midwife hurriedly removed my nail varnish (she didn’t even file and buff, so I knew things were getting serious). Then I was in theatre being prepared for an emergency c-section. I honestly don’t remember much more than that – any recollections I do have are what Mr D has told me, and his memory is notoriously rubbish anyway.

That was first time around. I wanted #2 to be different. I wanted a natural birth. Turns out, though, you don’t always get what you want…

Best laid plans
Up to 33 weeks I had had a carbon copy of my first pregnancy. All very non-eventful. I was massive (as random strangers would repeatedly tell me – or mutter behind my back, like I might not have noticed this bump I was sporting), I was waddly and may have complained about being uncomfortable once or twice a day. Ok, maybe five times a day. Maybe more. I craved the same things as I had with Bear (ice cream and orange juice, both of which were consumed by the bucketload for the best part of 9 months and haven’t been touched since). In fact, things were so similar that I was convinced we were having another girl. 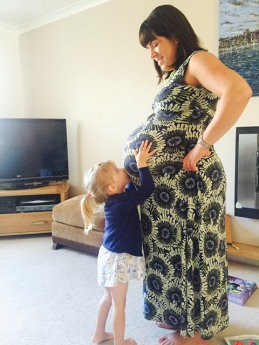 Fast forward to 36 weeks. A normal midwife check had me sent down the hospital because they suspected my waters might have started going. Hours and hours of being on the monitor, an overnight stay, another scan, blood tests galore, talk of steroid injections and induction, and I was sent home. Turns out I was just involuntarily weeing myself, which was nice. Panic over.

The test results did show two things, though. Group B Strep and a larger-than-average baby. I won’t bore you with the consequences of these two facts but – coupled with a previous emergency section and the fact that I didn’t get very far in natural labour – they were spanners in the works of my “I want a natural birth” plan.

The big decision
With the support of our consultant, we booked in for an elective cesarean. Quite possibly the hardest decision we have ever made (and we are notoriously crap at making decisions, especially on a Friday night when it comes to what takeaway we’re having). To choose to go through that surgery, to volunteer yourself for the recovery afterwards and to once again leave your stomach muscles beyond help; that is not the “easy option”, as I have heard it put in countless pro-natural birth articles. It is also no less of a “proper birth” (someone actually said this to me part way through my pregnancy – “Fingers crossed you can have a proper birth this time!” How rude!)

On 20th September we welcomed our perfect baby boy to our family. All 10lb 7.5oz of him (that, ladies and gentlemen in Tesco of nosy disposition, is why I was so – as you put it – “massive”). The radio was playing, I remember everyone in that theatre room and how kind and patient they were. It was calm, every step was explained to me until I was happy to continue. When the needle was going into my spine the midwife asked me how I was feeling, and my response – which was so totally honest that I amazed myself – was “I feel really, really relaxed”. Me – relaxed! That never happens, not even on a spa day.

Family of four: done
Four weeks down the line and we’re settling into life as a family of 4; it’s chaos, but it’s going ok. My recovery is going well – every day I feel an improvement, although ‘taking it easy’ isn’t that easy when there is a resident 3 year old whirlwind who needs me as much as she ever did. My stomach both looks and feels like it’s been through the mill – hardly surprising given the size of our boy – but for the first time in years (I mean YEARS) I am actually ok with it. I’ve housed two children. I am entitled to a flobby tummy.

Choosing to put my body through the surgery and the recovery wasn’t easy, but it was the safest option for our boy and for me, and it was undoubtedly the best decision in the end. It was the calmest experience and I happily remember every single detail. In fact, 4 weeks down the line I would happily do it all over again. Seriously. Not the pregnancy bit, mind – I’m not that crazy.